Age and Career Decisions: Are the Older, Wiser?

The influence of age on decision making is once again in the limelight. While monitoring the Democratic nomination bloodbath in Pennsylvania, I came across an interesting NYT article on age as a predictor in voting habits. The article basically says older people go for Hillary because they identify with her level of experience, the time in which she grew up (or became "socialized"), and according to one voter, "People who are more mature analyze things. They’re wiser." And vice versa with Barack Obama - he's young (46), offers more inspiration to younger people and has less baggage than Hillary because he has a shorter track record among other reasons. Generational politics appears to be more important in this election than the last.

How does age influence career decision-making? Is it true that older people, which I define as anyone making a career transition - whether they are 25 or 65, are "wiser" in career decisions than high-school or college students? According to a survey of studies on work and vocational psychology in the 2007 Annual Review of Psychology, they are.

I singled out a few interesting findings:
This is good news for most of us. We need every advantage we can get to adapt to the current working world truths:
Successful adaptation skills, whether you are just starting out or transitioning your career/job, are now critical to lifelong career success. And as I've gotten older, I have no choice but to learn how to adapt to life's positives and negatives - whether it is achievement, illness, losing family members, or having a baby. Practice makes perfect, right?
Posted by Juliet Wehr Jones at 9:47 AM No comments:

Career Test Results: What Not to Expect

When I talk or email with someone about career test results, I sometimes find that a few people expect a career test to match them with one perfect career or give them a result with perhaps 5 or fewer "best careers" for them.

No scientifically valid career test can provide such a tailored result, and any test that provides such a result is misleading. Perhaps the phrase, "if it's too good to be true, it isn't [true]" is applicable here.

The process of choosing a career is necessarily complicated and time-consuming. And it also can be frustrating and hard to narrow down one's choices. Having a buffet to choose from is not always the most satisfying, nutritional, or efficient way to feed oneself.

Scientifically valid test results, like those from The Career Key test, and the exercises on our website help you narrow down your career choices:
So although no one can credibly hand you a test result with your perfect career on it, there are proven guidelines for getting there. Better to trust homework you do on yourself and your options, rather than someone telling you what you should do.
Posted by Juliet Wehr Jones at 10:32 AM No comments:

4 Ways to Use Job Skills to Reach Your Chosen Career

Looking for a list of job skills needed to reach your chosen career? Are you properly using those skills to position and market yourself? What gaps do you need to fill? Start with the 17 Foundation Job Skills list found on our website. Here are 4 ways to use these Foundation Skills to get your chosen career and job:
Remember that you're a free agent in the workplace. You are your skills and the more you have that are transferable between employers and occupations, the better off you'll be - both in career and salary options.
Posted by Juliet Wehr Jones at 11:23 AM No comments:

If you want to find out what startup businesses may NOT be the right choice, OK! and other gossip and fashion magazines are your idea book. These magazines contain ads/articles for many of the products featured in hot new business lists. Noting the popularity of my post on hot new businesses, I wonder if people are looking in the wrong direction to what's "hot" now instead of what works now and will work in the future.

Granted, our consumer culture almost certainly guarantees a place for "hot list" celebrity wannabe merchandise like handbags, specialty lingerie, and organic cotton PJs eco warrior Leonardo DiCaprio wears (now that he's no longer dating supermodel Gisele). While "of the moment" now, these items are expensive to create, market, and wedge into an already crowded field. The "hot" lists say little about these challenges. And more importantly, is your personality even compatible with these industries?

What about the time-tested successful areas like franchises, real estate development, and services? I think these options are sometimes lost in the spectacle of what's hot now. It's easy to get caught up the the frenzy to be "of the moment," envisioning your product on Oprah's favorite things list. All I'm suggesting is that when you consider business ideas, you look at areas compatible with your personality AND have a market, both now and in the future. Our website contains a lot of practical information about high quality decisions that will help you.
Posted by Juliet Wehr Jones at 10:32 AM No comments:

Need Career Help? Reconstruct Yourself and Take a Risk 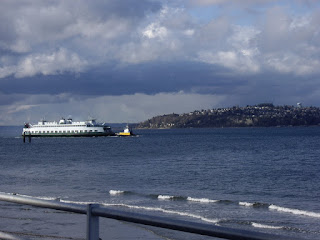 Need a push? This tugboat helps one of Washington state's ancient ferries reach some much needed TLC at the WSDOT Spa & Drydock. Like that ferry, beaten up by life's adventures (and a few dock collisions), in a career change we need some TLC, reconstruction and a push to take another risk on the open ocean.

People making a career choice, either starting out or as part of a career change, often suffer from misconceptions and biases. A little reconstruction of your beliefs about yourself and about career options may be in order. A career path you may not consider an option because of biases about its legitimacy or prestige, may turn out to be the right choice. Here's an example.

A Generation X'er friend of mine recently switched from HR recruiting to retail sales at an upscale department store. Having left her unsatisfactory recruiting job and stagnating in her career choice process, she needed to pay the rent. So she applied for her current retail job and contrary to her expectations, loves it and believes it will lead to several satisfactory career options as she gets promoted. She's energetic, outgoing, enthusiastic, and has a great sense of style and risk - so it works well for her. It was a job she thought she'd be good at and she was right, although she had some preconceived negative ideas about it as a longer term career path, which turn out not to be true.

I also posted last week about careers in the trades and how some people in office jobs with college degrees regret they did not pursue trade work, not only because of the better salary but more importantly because the job duties themselves would have been more compatible with their personality. We do not recommend ignoring biases you may have against "blue collar" work. We recommend that you consider these biases (and those of your family and other influences on your decision making) as part of the larger picture, and as you gather more fact-based information (i.e. through information interviewing and other methods of career exploration), you can evaluate all the information in a cool, reasoned, and scientific way to make a good decision.

You may find that your biases are just that - not based on fact or are no longer relevant when measured against your greater satisfaction with a career path. While the grass is often greener elsewhere, you are less likely to feel that way if you've followed a successful, considered method for making a career choice decision.

Some of my more popular posts and the most popular parts of The Career Key website are on career indecision, showing many people struggle with the process of choosing a career. Rethinking your perspective on career options and taking a risk (while paying the rent) may be your next move towards career success.
Posted by Juliet Wehr Jones at 10:00 AM No comments: