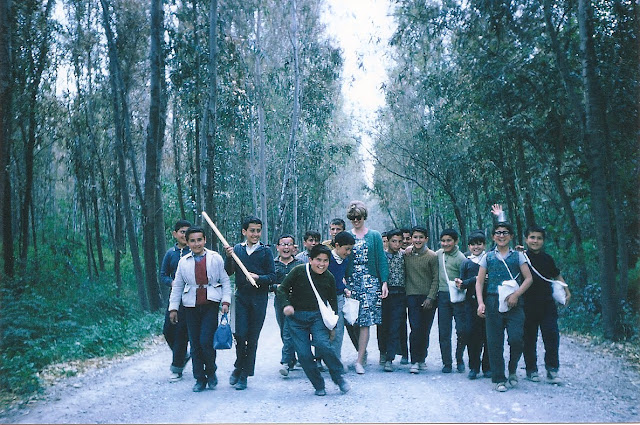 This Mother’s Day I’d like to focus on my Mom’s career choices and to thank her for all the work it took to make them.

I love this photo of my mom, Jeanine Wehr Jones, who (in my admittedly biased view) looks like a movie star with her smile, blonde hair and big sunglasses. In 1966 when this photo was taken, she taught English in Turkey as part of a Peace-Corps type of program. She was taking her students on a hike, sharing with them her interest in nature - just as she later shared it with my brother and me.

During teachers’ orientation, she met a fellow new college grad and my father, Dr. Lawrence K. Jones, The Career Key’s author. A couple of weeks later, he proposed to her on the boat from New York City to Turkey. More about his story at The Career Key website.

After getting married and returning to the United States, Mom worked as an elementary school teacher in Philadelphia where my father was in graduate school. Later, she would follow him to Missouri and finally Raleigh, North Carolina where she stayed at home to raise my brother and me for a few years.

When I was in middle school, my mom went back to school to get a master’s degree in library science, commuting a long distance in the pre-Internet days before online degrees and distance learning. At the same time, she helped care for her mother and raise her own family.

From graduation with honors until her retirement, she worked in the media center for an “alternative” high school. My mother’s Brooklyn, NY style humor was a hit with disadvantaged kids who didn’t know what to make of it. She told one streetwise kid to press his “whisper button” on his shoulder. He looked at his shoulder and then at her, puzzled. Then he laughed and was quieter. Her love of information and research led her to library science, but in the end she spent more time disciplining teenagers than she would have liked. She tries to make light of that job’s challenges, but it was stressful.

Later, Mom supported my father’s efforts back in 1997 to create The Career Key website; she was and still is an integral part of making Career Key successful. Her feedback, suggestions, and research skills continue to help it grow.

My mom’s first step in a series of career paths began in the 1960s but her story is just as relevant to today’s mothers. Caregiving aging parents and raising children, while working to earn a living to support the family is very much a current story. Many mothers (and more fathers) juggle all these balls and some even more.

Thank you, Mom for setting a good example for how a mother can successfully handle the career journey while helping to improve the lives of her children. For helping young people through teaching and education, while doing all the hard and often tedious work it takes to keep a household functional.  Hopefully I can do as well for my son and family. Happy mother’s day!
Posted by Juliet Wehr Jones at 11:28 AM

Juliet, I love this one, which will clearly "press a button" with so many women (and men also) who have had to play that juggling game.
For me personally, I started a business - now CHOICES Career Advice - to help young people to find their right path in life, because I recognised that my oldest child, Mark, and many like him attending high school, were just not making the right decisions as they had no clear idea what their options were. This was back in 1997. He (Mark "went through" with much support, guidance and encouragement, and developed his own style along his path before committing to assisting CHOICES in this quest to help others. He did this so naturally and brilliantly through his own personal skills and talents as an inspiring and motivating speaker who had real stories to share.
As a mother, I miss him - two plus weeks after his passing - but as a family we know that he has motivated and inspired us also and that his memory lives on.
He is with us always and our work continues, because of him, and now our juggling begins again for the three young offspring he has left with us.